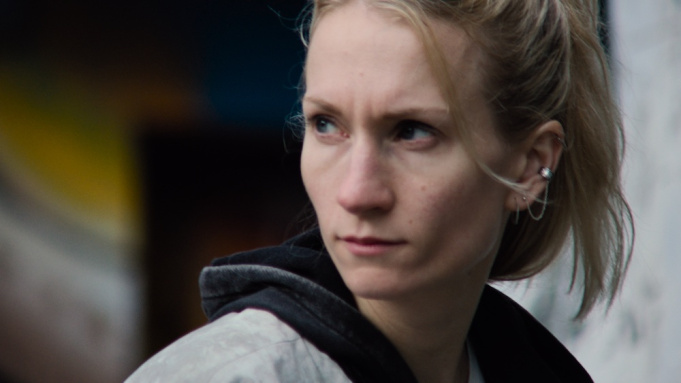 The flawed protagonist of Itonje Søimer Guttormsen’s strong feature debut is sure to generate polarizing reactions.
The most fascinating element of Itonje Søimer Guttormsen’s strong feature debut “Gritt” is the way the director presents a problematic character who polarizes viewers. For some, Gritt (Birgitte Larsen) will be seen as a passionately creative woman whose inability to break into the alternative performance community leads her to make some very bad choices — when her free-thinking approach is stifled, she’s denied an outlet and does some foolish things. Others however will have a different take: Gritt is a troubled woman who appropriates half-ideas she’s unable to fully process, and it’s her self-centered fixation on being an outsider that leads to a serious betrayal of those around her.
Whether you’re sympathetic to Gritt or not, thanks to Larsen’s terrific embodiment she’s never less than an intriguing character, and the way the film leaves open the possibility of interpretation makes it an ideal festival entry. Søimer Guttormsen and Larsen first began exploring this character in the 2016 short “Retrett,” which is likely why Gritt feels so fully-formed, and why they’re comfortable going out on a limb in presenting all her flaws.
Though the film isn’t aiming for a kind of documentary hybridity, it does incorporate real people portraying themselves, lending it a sense of realism further supported by Patrik Säfström’s organic observational camerawork. It would be interesting to know on what side theater directors Lars Øyno and Brad Burgess fall in their own assessment of the protagonist, given how she uses and then betrays the assistance given by their mirror selves.
After years trying to break into the alternate theater scenes in Los Angeles, Berlin and Denmark, Gritt still feels marginalized by the communities with whom she believes she shares an affinity. She’s first seen in New York, accompanying Marte (Marte Wexelsen Goksøyr), an established actress with Down syndrome performing with a visiting Norwegian theater company in an Ibsen tribute. While on a wander, Gritt runs into members of the Living Theater rehearsing in a park, and she’s inspired by their director Brad Burgess when he tells her, “It’s our job as artists to break the structures of society.” The statement melds with her ideas for a performance piece called “The White Inflammation,” designed to force a paradigm shift in how Scandinavian society views itself and the world.
Back in Oslo, apartment-sitting for her aunt, Gritt is crushed to learn that her application for Ministry of Culture funds to realize her ambitious project wasn’t accepted because she’s not established enough. On a recommendation from Burgess, she visits Lars Øyno’s experimental Theater of Cruelty, where she’s allowed to “help out” without actually becoming integrated into the company. Her aunt’s return means she’s homeless, so she secretly sleeps in the theater until Øyno realizes and, in an act of generosity, allows her to stay, even giving her a project to film in a refugee center, which will then be incorporated in a theater production.
Gritt goes far beyond her remit, grabbing the opportunity to do workshops with the refugees while crafting a performance piece which she claims has the Theater’s backing; when Øyno, on tour, gets wind of what’s happening, he pulls the plug. In desperation, Gritt tells the participants that they’ll all regroup, but instead she abandons them. As she continues to float between performance groups and women’s collectives, her hold on reality slips further away.
Søimer Guttormsen’s attraction to Gritt’s character may be why she refuses to demonize the woman’s betrayal of the refugees, though most audiences will likely have difficulty granting absolution for such monumental irresponsibility. Gritt is a magpie, stealing ideas (and more) from others and then trying to incorporate them into her great project, but she lacks the mental wherewithal to make it happen. She’s so internalized being an outsider among outsiders that she’s become incapable of honesty — some may see her as a victim of a system rigged to exclude all but the anointed, while others are more likely to pathologize her asocial behavior, offering less sympathy while acknowledging her pull.
Larsen has an almost rhythmic approach to her character, injecting Gritt with energy flows whose warm currents cool off until brittleness becomes her overriding trait. Multiple viewings would possibly make clearer whether film elements designed to look like super-8mm have a different point-of-view, though the uncertainty could also be intentional. Either way, their textural quality, combined with the format’s historic catalyst for experimentation, fits the director’s vision as well as the protagonist’s view of herself. Excellent editing maintains a tempo sensitively aligned to Gritt’s fragmentation.