This Season’s Show-Stopping Performances Can Be Found on Netflix 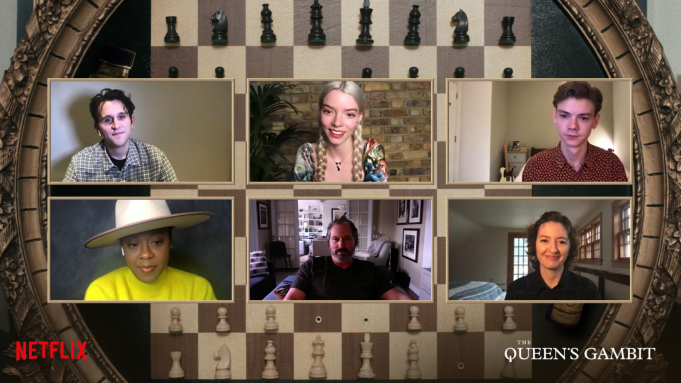 ‘The Queen’s Gambit,’ ‘Ozark,’ The Crown’ and ‘Dead to Me’ showcase a breadth of undeniable talent and breakthrough performances
As the winter award season wakes from its delayed-by-the-pandemic slumber, shows like “The Queen’s Gambit,” “Ozark,” “The Crown” and “Dead to Me” delivered riveting and memorable performances throughout the year.
After premiering last fall, “The Queen’s Gambit” went on to break viewing records and became the biggest limited scripted series to date on Netflix with 62 million households viewing the show in its first 28 days. A worldwide hit, “The Queen’s Gambit” ranked No. 1 in 63 countries and pierced the culture zeitgeist, prompting chess board sales to skyrocket.
Executive producer-director-writer Scott Frank, praised “The Queen’s Gambit’s” lead actress, Anya Taylor-Joy, for her unforgettable performance in the limited series. When writing the series, which is based on a 1983 novel by Walter Tevis, Taylor-Joy was the first actress who came to his mind to play chess prodigy Beth Harmon.
Taylor-Joy was filming two projects when Frank sent her the novel, but once she started reading the book she stopped being overwhelmed and fell in love with Beth and “The Queen’s Gambit’s” world.
“I really felt like there was something special,” Taylor-Joy says, explaining she had difficulty containing her excitement when she first met Frank to discuss the role. “Before I said hello, I screamed, ‘It’s not about chess and she has to have red hair!’ … We were just instantly deep and in it — and we had the same vision. That never happens.”
The critically acclaimed royal-family saga “The Crown,” returning for a fourth season, added two powerhouses to its award-winning ensemble: Emma Corrin as “the People’s Princess,” Lady Diana Spencer; and Gillian Anderson as venerable prime minister Margaret Thatcher. They joined an already illustrious cast, including Olivia Colman, Helena Bonham Carter, Tobias Menzies, Josh O’Connor and Erin Doherty, as “The Crown” moved into a more modern time period, 1979-1990, offering Queen Elizabeth II (Colman) new challenges.
Breakout star Emma Corrin says creator Peter Morgan’s writing captured all sides of her character, Princess Diana, “which is a blessing to play because it means that [the character is] not just one level. Diana took me all over the place, which was an absolute gift as an actor.”
She and Josh O’Connor, who stars as Prince Charles, were conscious of playing their roles in a way that avoided foreshadowing.
“We always had to remember not to play the ending, not to play the tragedy,” says Corrin, “but also, at the same time, to be aware of it.”
Two Netflix favorites, “Ozark” and “Dead to Me,” also returned for their third and second seasons respectively to deliver shocking, awe-inspiring and tearful performances.
Led by Emmy Award winners Jason Bateman, Laura Linney and two-time “Ozark” Emmy winner Julia Garner, the third season of “Ozark” finds the Byrdes having to prove themselves in the most gut-wrenching of ways.
Delivering one of the best performances of the season, Bateman, noted that levity is part of the show’s success, particularly in the scenes involving a therapist who Marty (Bateman) and Wendy (Linney) separately — and unbeknownst to one another — bribe to see things their way.
“Anybody can raise stakes with a gun and a larger portion of money,” says Bateman, “but when you start to ask the audience to relate to elements of emotion and spirituality or ethics, a therapist’s office is a great place to discuss those things.”
Linney adds, real comedy touches on the truth and offers a release.
“It illuminates something that you can’t deny,” she says. “Consequently, you laugh like crazy because it’s so uncomfortable and so true. The kaleidoscope changes just a little bit so that the audience can see down a whole different road that they haven’t seen before.”
New challenges are presented in the addictively dark second season of “Dead to Me,” starring Emmy Award winner Christina Applegate and Emmy Award nominee Linda Cardellini. The performances in Season 1 taught the show’s creator, Liz Feldman, that magic happens during scenes when Jen (Applegate) and Judy (Cardellini) are on-screen together.
“Some of my favorite moments are just when they’re riffing together,” says Feldman. “It started as improv and then in Season 2 we started writing it. In Season 2, we would always leave a space in every scene where they could start improving and living in the moment.”
Cardellini praises her co-star’s ability to deliver in both comedic and dramatic moments.
“The improvisation we started to do and the rapport that we had was immediate,” Cardellini says. “It was really, truly her sense of being relaxed in the character and the moment — and her timing is beautiful.”
The show’s core friendship grew deeper and the traumas that bonded Jen and Judy loomed larger in Season 2.
“It is a partnership,” Applegate says of acting opposite Cardellini. “Linda and I, offscreen, held each other up. And on-screen, these characters were holding each other up. It was very genuine and real and that was something I hadn’t really experienced in that depth.”