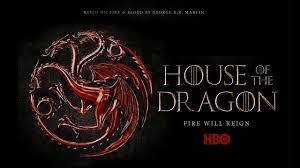 FROM THE MAIN CHARACTERS AND KEY LOCATIONS TO THE NEW SHOWRUNNERS AND POTENTIAL PLOT POINTS, WE'RE SPILLING AS MANY BEANS AS POSSIBLE ABOUT THE GEORGE R.R. MARTIN-APPROVED SPIN-OFF SERIES.
A new teaser for HBO Max confirms that House of the Dragon, the prequel to HBO’s epic fantasy series Game of Thrones, will premiere in 2022.

The series is expected in 2022, HBO programming chief Casey Bloys told select media outlets at the Television Critics Association winter press tour in January. The network picked up the series, based on author George R.R. Martin’s A Song of Ice and Fire book series and its companion materials,  WarnerMedia announced to investors in late October 2019.

“House of the Dragon has been in development for several years (though the title has changed a couple of times during that process),” Martin wrote on his blog in response to news of the series pickup. “It was actually the first concept I pitched to HBO when we started talking about a successor show, way back in the summer of 2016.”

Set 300 years before the events of Game of Thrones, the series tells the story of a turbulent period for House Targaryen, one that set sibling against sibling and dragon against dragon. The point of contention: who should rule on the Iron Throne, of course.

“If you’d like to know a bit more of what the show will be about… well, I can’t actually spill those beans,” Martin teased in his blog, “but you might want to pick up a copy of two anthologies I did with Gardner Dozois, Dangerous Women and Rogues, and then move on to Archmaester Gyldayn’s history, Fire & Blood.”

Dangerous Women includes what press materials describe as a “35,000-word novella” by Martin called “The Princess and the Queen, or, the Blacks and the Greens,” which is “about the Dance of the Dragons, the vast civil war that tore Westeros apart nearly two centuries before the events of A Game of Thrones.”

Rogues, meanwhile, includes Martin’s story “The Rogue Prince, or, a King’s Brother,” which chronicles “the early life, adventures, misdeeds, and marriages of Prince Daemon Targaryen,” considered “one of the biggest rogues in the entire history of Ice and Fire.”

Finally, the novel Fire & Blood, released in November 2018, is the first novel of a two-part history of the Targaryens in Westeros.

“Centuries before the events of A Game of Thrones, House Targaryen — the only family of dragonlords to survive the Doom of Valyria — took up residence on Dragonstone,” according to the book’s description on the author’s site. “Fire & Blood begins their tale with the legendary Aegon the Conqueror, creator of the Iron Throne, and goes on to recount the generations of Targaryens who fought to hold that iconic seat, all the way up to the civil war that nearly tore their dynasty apart.”

Sapochnik won the 2016 Primetime Emmy award for Outstanding Directing for a Drama Series for Game of Thrones episode “Battle of the Bastards” and shared the 2019 Outstanding Drama Series Emmy award with Martin, Gerardis, series creators David Benioff and D.B. Weiss, and other producers on the final season.

Paddy Considine as King Viserys Targaryen. Viserys was chosen by the lords of Westeros to succeed the Old King, Jaehaerys Targaryen, at the Great Council at Harrenhal. A warm, kind, and decent man, Viserys only wishes to carry forward his grandfather’s legacy, but as we’ve learned from Game of Thrones, good men do not necessarily make for great kings.

Olivia Cooke as Alicent Hightower. She’s the daughter of Otto Hightower, the Hand of the King, and the most comely woman in the Seven Kingdoms. She was raised in the Red Keep, close to the king and his innermost circle; she possesses both a courtly grace and a keen political acumen.

Emma D’Arcy as Princess Rhaenyra Targaryen. The king’s first-born child. She is of pure Valyrian blood, and she is a dragonrider. Many would say that Rhaenyra was born with everything…but she was not born a man.

Matt Smith as Prince Daemon Targaryen. The younger brother of King Viserys and heir to the throne, Daemon is a peerless warrior and a dragonrider who possesses the true blood of the dragon. But it is said that whenever a Targaryen is born, the gods toss a coin in the air…

Read more about some of the possible characters based on the books (see spoiler alert first) below.


RELEASE DATE
A video teaser for HBO Max confirmed in December that House of the Dragon will be released in 2022. The teaser shows only a dragon roaring fire and a new glittering gold logo. But what a dragon!


WHEN IT TAKES PLACE
The Targaryens landed on Dragonstone more than four centuries before the events of the original Game of Thrones series. The Dance of the Dragons was a war of succession fought from 129 to 131 AC — that is, after Aegon I’s conquest of Wasteros.


WHAT’S THE BIG CONFLICT?
The Targaryen civil war was a conflict over primogeniture, the system of inheritance by a firstborn child; often, the first-born son. A lord’s first child will inherit the castle and lands of his or her father over an older sibling no matter what his or her aptitude for governance compared to a sibling’s abilities. The Targaryens generally followed primogeniture, though there were exceptions, as during the rule of King Jaehaerys I.

When King Jaehaerys I’s eldest son, Prince Aemon, died, he left a daughter, Rhaenys. King Jaehaerys I then chose his next eldest son, Prince Baelon, to be new Prince of Dragonstone and heir to the throne rather than bestowing the honor on his granddaughter, a move that even Queen Alysanne disapproved of. When Baelon died unexpectedly — as well as Queen Alysanne and one of their daughters — grief-stricken Jaehaerys convened the Great Council to vote on succession, and the council chose Baelon’s son Viserys instead of Rhaenys’ son Laenor.

During his reign, Viserys had named Rhaenyra, his daughter by his first wife, as his heir, but upon Viserys’ death, his eldest son, Aegon, by his second wife instead ascended the throne, causing a great rift in the kingdom. By this time, Rhaenyra was also married to her uncle, the “rogue prince” Daemon Targaryen who had long sought the throne himself.

Fire & Blood recounts the battles between the siblings, their spouses, their offspring, their loyal followers, and, most viciously, the Targaryen dragons.


WHO ARE THE POSSIBLE PLAYERS?
King Viserys I (103–129 AC) – his death in early 129 began a great struggle of succession between his eldest child Rhaenyra and his first-born son, Aegon. Viserys’ dragon was especially notable: Balerion, the Black Dread, who King Aegon I Targaryen rode back during the Conquest of Westeros. Born in Valyria, Balerion was the last living dragon to have seen the Freehold, which the Targaryens left 12 years before the Doom. He was black-scaled with black wings and even black fire, which burned so hot that it melted the stone towers of Harrenhal (you saw the ruins in Game of Thrones when Arya Stark served as cupbearer to Tywin Lannister). Balerion died at around 200 years old in 94 AC, less than a year after Prince Viserys claimed him and while the prince was still very young; therefore, it is unlikely that House of the Dragon will show Balerion alive, unless the writers change the story or in flashback.

Alicent Hightower – Viserys I’s second wife whose followers who would see Aegon crowned and were called “the greens” after a green gown the queen wore during a great tourney in which Rhaenyra wore traditional Targaryen black and red.

Daemon Targaryen – Viserys I’s brother, Daemon was mad, bad, and dangerous to know — a skilled warrior and a denizen of disreputable Flea Bottom establishments. Rumored to have taken his teenage niece Rhaenyra’s virginity, he was sent into exile by Viserys. Years later, he would marry Rhaenyra, and upon the death of Viserys, he crowned his own wife, which touched off the bloody civil war known as the Dance of the Dragons. Dragon: lean, but fearsome red Caraxes, also called “the Blood Wyrm.”

Rhaenyra – Viserys I’s daughter and first-born child by Aemma Arryn, Viserys I’s first wife who died in childbirth with her second child, a son, who also died. Rhaenyra was beautiful and beloved by her father and the people and was nicknamed “the Realm’s Delight” when she was young. As she grew older, she grew headstrong and competed with her ambitious stepmother Alicent. Her followers were called “the blacks” because of the gown the princess wore on the king and queen’s fifth anniversary tournament. Dragon: young yellow-scaled Syrax.

Ser Laenor Velaryon – Married his reluctant cousin Rhaenyra, who remarked to her father, “My half-brothers would be more to his taste.” Dragon: Seasmoke.

Rhaenys Targaryen and Lord Corlys Velaryon – Parents of Laenor Velaryon. She was known as The Queen Who Never Was, because she was passed over as heir to the throne in favor of her uncle. Corlys was known as “The Sea Snake,” because of his prowess at sea.

Harwin Strong (aka “Breakbones”) – son of Lord Lyonel Strong and heir to Harrenhal, he was Rhaenyra’s lover while she was married to Laenor.

Princes Jacaerys “Jace,” Lucerys “Luke,” and Joffrey “Joff” Velaryon – Rhaenyra and Laenor’s children, though rumored to have been fathered by Strong because they had dark hair like Strong, while cousins Laenor and Rhaenyra both had the Targaryen light silver/gold hair. The boys’ dragons were, respectively: Vermax, Arrax, and Tyraxes.

Twins Jaehaera and Jaehaerys and their younger brother Maelor – the offspring of Aegon II and Helaena.

Blood and Cheese – hired killers who murdered Jaehaerys in front of his mother, sparking her descent into madness.

Mysaria – a prostitute who served as Daemon’s mistress of whisperers in Flea Bottom. The prince impregnated her, but she lost the child during a voyage to Lys to escape Viserys I’s anger over Daemon’s attempts to give the child a dragon egg, per Targaryen custom.

Aegon III (131–157 AC) – the son of Daemon and Rhaenyra Targaryen, he ruled after his uncle Aegon II, and at a very young age, married his cousin Jaehaera, who died young. His rule marked the end of the Dance of Dragons. He had five children by his second wife, Daenaera Velaryon. As a child, he grew melancholy after escaping a naval attack by mounting his dragon, but leaving his brother Viserys behind and believing that he had died. The brothers reunited later in life. Dragon: Stormcloud.

Mushroom – a fool in the courts of Viserys I Targaryen, Aegon II Targaryen, Rhaenyra Targaryen, and Aegon III Targaryen. His accounts of his days at court teemed with tales of debauchery and scandal.

Dragonseeds – Nettles, Hugh the Hammer, and Ulf the White were purportedly bastard Targaryen offspring. They each claimed dragons and fought for Rhaenyra, though Hugh and Ulf later switched allegiance.

Prince Qoren Martell – Dornish ruler who supported the Triarchy (an alliance of the Free Cities of Myr, Lys, and Tyrosh) in a war for the Stepstones against Prince Daemon Targaryen and Lord Corlys Velaryon.


LOCATIONS WE’RE LIKELY TO SEE
Much of the drama takes place in King’s Landing and Dragonstone, but the fighting and bloodshed primarily happens in the Riverlands (led by House Tully at Riverrun). Many of the bloodiest battles occur around Harrenhal and The God’s Eye.